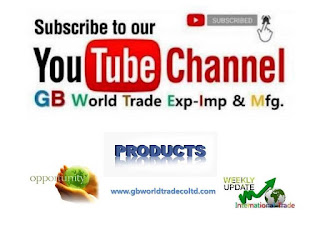 Pain is a good thing physically because that is your preservation self-preservation mechanismBut suffering is something that you do in your mindSo pain that happens in your bodyyou take it in your mind and multiply it a thousand times or a million times depending on how capable you are andSuffer it a million times overright nowMost human beings are like this what happened ten years ago. They can still sufferWhat may happen the day after tomorrow they already suffer?They are not suffering life they think they are suffering like they are not suffering life they are suffering the two mostFantastic faculties that human beings alone have a vivid sense of memory and a fantastic sense of imagination

Welcome to GB World Trade Co. Ltd. We as GB World Trade represent and friendship and goodwill as well as Global business relations between world wide. We Have been dedicated to serve the global market at 1998. The main focus of our Company business has been on the Total Satisfaction of our Customers followed by Quality Assurance, Competitive Price, Punctual Management and after Sale Service. GB World Trade make an Offer valuable and reliable with trust to its clients. Our Global clients know very well that their business here in South Korea, India, and Pakistan is Taken care care by GB World Trade. GB World Trade hopes to keep good trade relation with our current and prospective clients and we are confident of our ability to fully satisfy your needs in every respect. thanks CEO: Yu Sung Guk http://gbworldtradecoltd.com/ Subscribe Channel: https://www.youtube.com/user/gbwtrade Channel Click Subscribe & Click on Bell icon Contact us +821066791588 WhatsAap gwtgmarket@gmail.com Website: www.gbworldtrdecoltd.ocm https://gbtrade.business.site Linkedin: https://www.linkedin.com/company/18950919/admin Subscribe Channel: https://www.youtube.com/user/gbwtrade Channel Click Subscribe & Click on Bell icon Facebook: https://www.facebook.com/GbWorldTradeColtd/ Instagram: https://www.instagram.com/yusungguk Blogspot: http://gbworldtrade.blogspot.com Twitter: https://twitter.com/gbtrade Google Map: https://g.page/gbtrade

Promote Your Page Too